Thornham History Society was established in 2013 as an informal group to research, collate, catalogue and provide access to the various scattered photographs, documents and artefacts which form the archive that tells the considerable history of our small village.

Our village history dates back to the Romans and the Anglo-Saxons, our Church was started in Norman times, if not earlier. We saw the start of property development in the early Georgian era, had smuggling (and the associated violence) as a major occupation in the 1780s and were home to a notable ironworks during the Arts & Crafts period of the early 1900s.

As well as undertaking research, the Society aims to put on regular public exhibitions & displays as well as publishing booklets & pamphlets  –  a pamphlet on the village’s history is currently available in All Saints’ Church and at THS events.  The Society provides an informal and relaxed way of looking at how the village was and how it has changed – everyone is welcome and no formal commitment is required.   For more information, please contact David Brooks on 01485 512548 or e-mail thornhamhistory@gmail.com.

The first major exhibition was a general Heritage Day held in February 2014, covering the Ironworks, the village school and local military heroes; information was supported by a miscellany of artefacts, press cuttings and photographs.  A slide show was also included, showing HM Queen’s visit on 28th January to open the new Village Hall.

The next exhibition, entitled Thornham at War – the village & WW1, was mounted in February 2015.  It featured aspects of the Home Front, life in the trenches and the aftermath of the war, with research on Thornham’s fallen heroes and artefacts & materials which had not been shown previously. 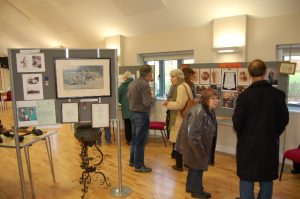 In addition, this exhibition featured the launch of the book Thornham – Then and Now, in which John Warham and Stephen Greef compared historical and contemporary photographs of the village and its people.

October 2016 saw a display mounted in All Saints’ Church detailing its long history and the many re-buildings and refurbishments to which it had been subject.

Following a decision to make major exhibitions a biennial event, Bricks & Mortar – Thornham’s history told by buildings and their occupants, was held in February 2017.  Covering occupation from the Iron Age to modern times, the history of several significant properties (from Georgian mansions to agricultural hovels) was described, with details of the wealthy merchants, farmers, war heroes and ordinary people who had lived in them. 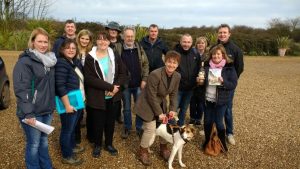 New ground was broken in March 2017, when we were asked to provide support for the Central Region Ops. Command of the Border Force (who carry out immigration and customs controls for people and goods entering the UK) who visited the area on a history-themed training exercise.

In May 2017, we had a small stand at the Docking Heritage Fair, including, for the first time, a PowerPoint presentation of old village photographs. This proved popular and the event provided a useful opportunity to meet with representatives of other local history societies.

A display at All Saints’ Church over the Harvest weekend in September 2017 included a detailed history of the ironworks from 1887 – 1920 and represented the largest assembly, for many years, of the items which they produced.

Also in September 2017, we were involved in a return visit by the Border Force. On this occasion, a wreath was laid on the grave of Customs Officer William Green who had been shot at close quarters during an ambush by smugglers.

In February 2019, being 80 years since the start of WW2, that conflict was the subject of At War Again – tales from Thornham 1939 -1945, combining both very local stories with a wider view of living conditions at that time, including some multi-media experiences for the younger audience.  This again proved popular and even featured on a live Radio Norfolk broadcast.

May 2019 featured another Docking Local History Day, providing the opportunity for further networking with other similar organisations – a useful contribution to the drive for greater cohesion amongst heritage groups across the county.

Very early planning is commencing towards our next exhibition in February 2021.  This will probably be about The Women of Thornham and the Society would appreciate feedback, suggestions and material about this subject.

Photographs on this page are copyright © most of them being by David Brooks. They may not be used without the express permission of the photographer or of Thornham Parish Council.